It’s been a couple months since I first blogged about how my thirteen year-old brother is a proud Brony (a boy over the age of 10 who likes the show ‘My Little Pony: Friendship is Magic’). In my graphic design class, we had to pick an article that either we wrote or found online to reformat for print and design illustration for. I knew that I wanted to use one of my blogs from Geekalitarian, and after careful consideration I chose ‘My Little Brony’.

After reading through the post again and mind-mapping ideas for illustrations, I began to think about myself when I was a middle schooler. While my brother may be obsessed with sparkly ponies, I worshiped at the altar of Tim Burton. While my brother is writing stories about ponies discovering the meaning of harmony, I wrote a story about a group of people brutally murdered who meet up in the afterlife to solve a mystery. Where Joanna and I spent gym classes discussing the virtues of various forms of torture, my brother and his friends discuss the complexities of Ponyville. For the most part, I still lean towards these ‘dark’ and macabre themes in my work. Who’s to say how long my brother will be in to ponies?

This makes me wonder what possible implications this could have. Does this say something signifigant about gender or sexuality? Some would like to think that my brother is gay becuase of his interest in MLP, a lot of other people also think that I am a lesbian. The world isn’t so black and white.

It is my hope that this comparison sparks some sort of discussion- either here online or elsewhere in your lives. The questions above that I raised are important, and I don’t know all the answers. (Although for the most part I know everything)

PS: Incase you are wondering, my illustration for this project is going to be a family photo of Burton-styled me and my brother as a pony. Once it’s finished I’ll edit this pos

‎”Proposition 8 serves no purpose, and has no effect, other than to lessen the status and human dignity of gays and lesbians in California, and to officially reclassify their relationships and families as inferior to those of opposite-sex couples.” -Judge Stephen Reinhardt, U.S. Court of Appeals for the Ninth Circuit.

A Q&A from the Mercury News sheds light on what may come next:

Q What is likely to happen after the 9th Circuit rules Tuesday?

Q How long will all this take?

A The legal fight over Proposition 8 isn’t likely to be concluded anytime soon. If the 9th Circuit rehears the case with an 11-judge panel, that appeal is likely to stretch through this year. And whatever the outcome in the 9th Circuit, the U.S. Supreme Court is almost certain not to get a look at the case before the upcoming presidential election.

Q What would be the impact of a 9th Circuit ruling declaring California’s gay marriage ban unconstitutional? Would it legalize gay marriage in all nine Western states covered by the 9th Circuit?

A It depends. The court can take a narrower approach and apply its ruling only to California, finding that Proposition 8 violates the rights of same-sex couples because it stripped away a previous right established in a California Supreme Court ruling in 2008 (Proposition 8 wiped that ruling off the books). Or the court can issue a more sweeping ruling that finds any such state ban unconstitutional, which would extend the ruling’s reach.

The battle for Love, as I like to call it, is far from over. But I leave you with this political cartoon: 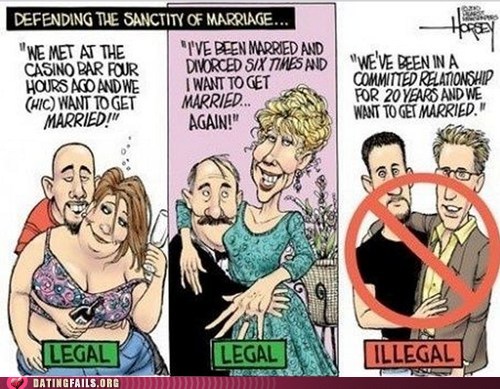 I can’t remember how exactly I discovered the webcomic Artifice, but I know it was definitely though a banner that read: “Smart Guy-On-Guy Romance”. I had been growing bored with typical Japanese yaoi and dime store gay romance novels*, so a webcomic that would advertise itself as ‘smart’ peeked my interest.

Artifice is a sci-fi webcomic created by Alex Woolfson and artist Winona Nelson. The story is centered around three central characters thus far: Deacon (an android), Jeff  (a human), and Maven (psychologist to the androids). The story begins with Maven interrogating Deacon about his mission to Da Vinci Four. Deacon, along with his fellow androids, had been sent to Da Vinci Four to eliminate the human colonists there. However one colonist survived, Jeff. At first Deacon needed Jeff to operate the computers so that he could recharge himself, but their attachment didn’t end there. The story is told in a flashback style for now, but I have a feeling the timelines will merge later on.

When I first began reading this comic, I was immediately absorbed by both the writing and the artwork. So absorbed I even signed up for the Yaoi-911 subscription service, which features two more comics by Alex Woolfson. Each Saturday I waited for the next page (‘camping’ as veteran webcomic readers call it). Both Deacon and Jeff are such interesting characters, and Maven… well, like many people who read Artifice I am not sure how I feel about Maven. Maven is what I would call a strong female character, but she is also a total bitch. Some people adore her, I personally wish the story would switch back to  Deacon and Jeff when I see her in the panel.

“I will say one thing, though—I love that you all are having this debate. Yes, Artifice is meant to be an entertaining sci-fi story first. But one thing that has always impressed me with our readers is the thoughtful responses to this work you all have—both to what’s happening to the characters in my world and to the larger implications of my choices as a creator in the world we live in. Be it a discussion about whether homosexuality could be determined purely through genetics (and the ethical ramifications of that) or the role of women as antagonists in comics, I can always count on you to offer really enlightening thoughts on the matter. It’s one of the coolest things about putting this comic out there. And I thank you for it.

He also diligently thanks everyone who contributes to Artifice– so if you want to give your money to someone, give it to ‘Artifice’ this holiday season (so poor moochers like me can have a bonus page)!

Winona Nelson is an amazing artist. She really knows how to depict the subtle emotions that all people unconsciously make when speaking and gazing. Her realistic style almost makes you believe that each panel is a manipulated photograph. While the artwork in Artifice is amazing, I strongly suggest you check out her website. I have noticed a trend, that even Marvel admitted to, about the female artists that get published in comics are webcomic artists as well. In addition to Artifice Winona also has illustrated for ‘Magic the Gathering’.

I hope that I have made it clear that Artifice is not just some fluff comic where two guys constantly bang each other, because it also deals with some pretty controversial issues. Most notably the fact that Jeff is homosexual because he has a C37 pair on his X chromosome. This admission has sparked an awful lot of controversy in the comments. Can homosexuality be linked to ONE abnormal chromosome? In this world it can. But Jeff also admitted that most people get an abortion when they discover their child is gay. In the present storyline we haven’t seen Jeff yet, but if his society believes he should have been aborted, I am sure he is a lot worse off than Deacon is in Maven’s iron claws.

Although there wasn’t much dissection in this blog as I normally try to achieve, the story isn’t through yet and I would hate to say something too soon (see: my Ghost Rider blog). Artifice is at the very top of my recommend list for guy-on-guy romances, for other recommendations check out the Links page at the top of the screen.

*I feel that I have to justify this remark. I do love me some gay romance. This is mainly because I cannot relate personally to female characters in your typical straight romance novel. I can usually identify more with a character from a guy-on-guy romance. Why is that?

Upcoming: ‘My Little Brony’ an interview with my little brother and his friends about coming out as a ‘brony’.